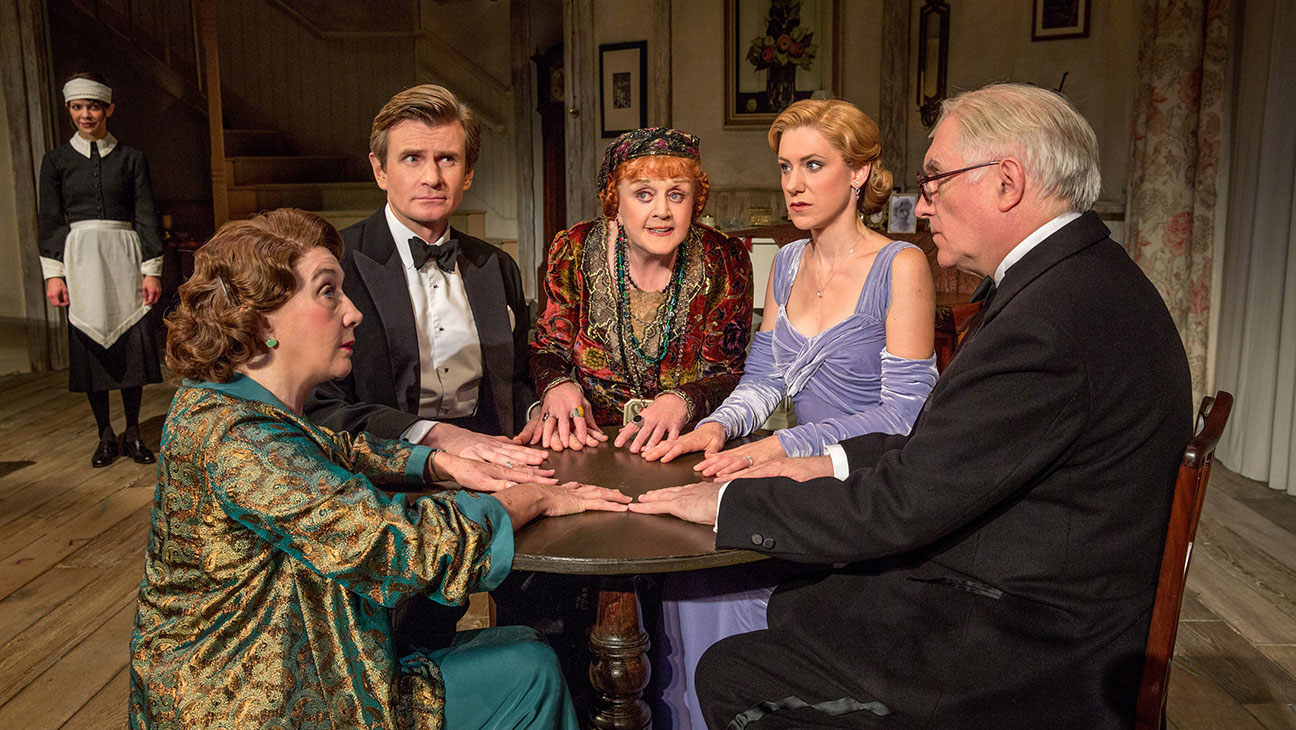 Reviews Blithe Spirit  Edward Hall’s new adaptation of Noël Coward’s play Blithe Spirit is so aggressively un-funny it might make audiences unfamiliar with the script’s successful track record wonder why it was ever a success in the first place. Of all the movie’s sins, this is the biggest.

Coward requires a light touch and nerves of steel. His characters are witty and heartless, with glittering carapaces of dazzling verbal weaponry.

They are self-involved, impulsive, and careless of consequences. When Coward is done badly, the plays come off as arch and stilted, the characters paper cut-outs representing generalized haughty attitudes.

It’s all-style, no substance. When Coward is done well, and you know it when you see it, there’s nothing better. Unfortunately, Coward is nowhere in sight in this new adaptation.

Even his famous dialogue doesn’t stand out. In fact, there have been many “improvements” added by the writing team of Piers Ashworth, Meg Leonard, and Nick Moorcroft, none of which improve anything.

Charles (Dan Stevens) is an award-winning crime fiction writer, tapped to turn one of his books into a screenplay. Charles suffers from writer’s block (the opening scene calls to mind Jack Nicholson in “The Shining”), and his wife Ruth (Isla Fisher) is fed up with his eccentric behavior.

Ruth is also mortified since her father, a producer at Pinewood Studios, is the one who gave Charles the job.

After seeing the stage show of a medium named Madame Arcati (Judi Dench), Charles gets the idea to include the occult in his script.

He invites Madame Arcati to his home to conduct a seance (for research purposes). Madame Arcati, an open fraud, has her first success ever, conjuring up Elvira (Leslie Mann), Charles’ first wife, an American woman who died in a riding accident. Elvira wasn’t just Charles’ dearly-beloved, she was also his writing muse, the one who gave him all his story ideas in the first place.

Elvira, back from the dead, is infuriated at Charles having moved on with another woman, so she proceeds to wreak as much havoc as possible.

Charles remembers his old passion for Elvira, and before you know it the two of them are

sneaking away for cocktails and script-conferences, just like the old days, with Elvira basically

writing his script for him.

(This new adaptation awkwardly tries to make a comment on the history of men taking credit for women’s work.) Ruth, desperate, asks Madame Arcati to send Elvira back from whence she came.

In this new version, Madame Arcati has been given a drippy backstory: apparently,

Arcati got into this whole medium thing in order to contact her dead husband, whom

she misses and still loves, kissing his photograph before she goes to sleep.

The story keeps switching back to Madame Arcati, and every time it does the film—

already struggling to get on its feet—sinks back into quicksand.

Leslie Mann comes closest to approximating Coward’s style. Her Elvira is ruthless, gorgeous, and doesn’t care about anybody else’s feelings. She wants what she wants. The more unhinged Ruth gets, the wider Mann’s smile. Mann, a gifted comedienne, keeps the plates spinning in the air.

Everyone else, though, drowns in a sea of self-pity. Charles feels sorry for himself because he can’t write anymore.

There’s nothing funny about a bunch of people moaning about their lot in life.

Coward’s characters are many things, but one thing they are not—ever—is self-pitying.

Giving everyone “self-pity” as their default setting is a big problem, but how Hall has chosen to

film Elvira as a ghost is a bigger one. In onstage productions, of course, the audience can see Elvira.

This is where the comedy comes from.

The audience sees what Charles sees. We know she is there, we know Charles isn’t going crazy,

but no one else can see her. It’s funny picturing how insane Charles must look to everyone not in

on the joke. Hall, though, switches up the point of view as the scenes go along.

Sometimes CGI-effects are used, so a lipstick floats in the air, defacing a photograph, or

the piano plays itself. But that’s just cinema trickery. It kills the comedy. “Now you see her

now you don’t” just calls further attention to the undeniable fact that you should be laughing, but you are not.

The framing is bafflingly inert: there are all these long shots, with people just standing

around talking to each other. Charles and Ruth’s house looks like an Art Deco-“Miami Vice”

mashup, and none of the interiors are explored for their comedic potential.

Everything feels like an old-fashioned sit-com, with people entering and leaving rooms, nothing “added,” no comedic bits, no character business, no inventive blocking. ดูหนังออนไลน์ A couple of old-fashioned pratfalls would have been welcome. Music plays underneath every scene, adding to the bland generic vibe.